Two years ago, though everyone is talking about the 100G Ethernet as the next generation, it had still faced a lot of problems to be solved, which seems to be a long way off. But, technologies are developed very rapidly, and now 100G Ethernet is becoming more and closer to us. Fiber connectivity in higher-speed active equipment is being condensed and simplified with plug-and-play, hot-swap transceiver miniaturization. Thus, optical transceiver technology is one of the basic but important technology to achieve the realiable and effective 100G Ethernet. Interfaces for 100G active equipment include CFP and CXP. So, what are CFP and CXP? And what’s the difference between CFP and CXP (CFP vs CXP)? Is CXP transceiver designed to replace the CFP module? … You might be interested in them and have a lot of questions in your mind. Today, you will find the answer in this post.

CFP, short for C form-factor pluggable, is a multi-source agreement to produce a common form-factor for the transmission of high-speed digital signals. The c stands for the Latin letter C used to express the number 100 (centum), since the standard was primarily developed for 100 Gigabit Ethernet systems. In fact, the CFP module also supports the 40GbE. When talking about the CFP module, we always define it as multipurpose CFP, compared to the CXP module which is discussed later.

The CFP MSA was formally launched at OFC/NFOEC 2009 in March by founding members Finisar, Opnext, and Sumitomo/ExceLight. The CFP form factor, as detailed in the MSA, supports both single-mode and multi-mode fiber and a variety of data rates, protocols, and link lengths, including all the physical media-dependent (PMD) interfaces encompassed in the IEEE 802.3ba standard. At 40GE, target optical interfaces include the 40GBase-SR4 for 100 meters (m) and the 40GBase-LR4 for 10 kilometers (km). There are three PMDs for 100 GE: 100GBase-SR10 for 100 m, 100GBase-LR4 for 10 km, and 100GBase-ER4 for 40 km.

CFP was designed after the Small Form-factor Pluggable transceiver (SFP) interface, but is significantly larger to support 100Gbps. The electrical connection of a CFP uses 10 x 10Gbps lanes in each direction (RX, TX). The optical connection can support both 10 x 10Gbps and 4 x 25Gbps variants. CFP transceivers can support a single 100Gbps signal like 100GE or OTU4 or one or more 40Gbps signals like 40GE, OTU3, or STM-256/OC-768.

The original CFP specification was proposed at a time when 10Gbps signals were far more achievable than 25Gbps signals. As such to achieve 100Gbps line rate, the most affordable solution was based on 10 lanes of 10Gbps. However as expected, improvements in technology has allowed higher performance and higher density. Hence the development of the CFP2 and CFP4 specifications. While electrical similar, they specify a form-factor of 1/2 and 1/4 respectively in size of the original specification. Note that CFP, CFP2 and CFP4 modules are not interchangable (but would be interoperable at the optical interface with approriate connectors). 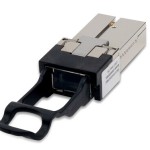 CXP is targeted at the clustering and high-speed computing markets, so we usually called it high-density CXP. Technically, the CFP will work with multimode fiber for short-reach applications, but it is not really optimized in size for the multimode fiber market, most notably because the multimode fiber market requires high faceplate density. The CXP was created to satisfy the high-density requirements of the data center, targeting parallel interconnections for 12x QDR InfiniBand (120 Gbps), 100 GbE, and proprietary links between systems collocated in the same facility. The InfiniBand Trade Association is currently standardizing the CXP.

The CXP is 45 mm in length and 27 mm in width, making it slightly larger than an XFP. It includes 12 transmit and 12 receive channels in its compact package. This is achieved via a connector configuration similar to that of the CFP. For perspective, the CXP enables a front panel density that is greater than that of an SFP+ running at 10 Gbps.

What’s the difference between CFP and CXP?
Despite having a similar acronym and emerging at roughly the same time, the CFP and CXP form factors are markedly different in terms of size, density, and intended application. The CFP and CXP optical transceiver form factors are hot pluggable, both feature transmit and receive functions, and both support data rates of 40 and 100 Gbps. But the similarities begin and end there. Aimed primarily at 40- and 100-Gigabit Ethernet (GbE) applications, the CFP supports both singlemode and multimode fiber and can accommodate a host of data rates, protocols, and link lengths. The CXP, by contrast, is targeted at the clustering and high-speed computing markets. The two are therefore complementary, not competitive, according to several sources. Thus, the existence of CXP does not mean the replacing of CFP.

However, things are never black and white. In some case, there is a competition between CFP and CXP, as CFP can also be used with multimode fiber. It becomes more of a choice for system vendors. Do they need to build a box that can adapt to any interface? If so, they would probably use CFP module. If it’s a box that is just focused on the short-reach market, then they would probably use something more like CXP.

Hope this post will let you more understanding the 100GbE transceivers, whether CFP module or CXP module. Similarly, you could know the 40GbE transceiver through this post as the CFP module and CXP module also support the 40GbE. If you want to have a further study on this subject, I suggest you learn the related reference of MSA. If you have any requirement for the related products, please contact us over sales@fiberstore.com.