Introduction
SFP+ may be the latest pluggable 10Gbit/s optical transceiver module. The name”SFP+”means value-added SFP. SFP stands for small form-factor pluggable,and is also an important optical transceiver useful for data rates up to 4Gbit/s. SFP+ is anticipated to give rise to the realization better speed communication networks of the next generation.

SFP+ is defined in the specification as creating a mecha-nical structure compatible with SFP, and also as could be plugged into one blade up to 48 consecutive ports.The SFP+ module form factor is 30% smaller,uses less power,requires fewer components,and is less expensive than the 10-Gigabit small form-factor pluggable module (XFP) form factor,that has been already smaller and used less power than the XAUI-based XENPAK and X2 form factors.

The SFP+ form factor significantly simplifies the functionality of the 10G optical module by moving such functions as clock and Data Recovery (CDR),Electronic Dispersion Compensation (EDC),10G SerDes,and signal conditioning that traditionally resided within the XAUI-based modules into 10GbE PHY devices and line cards.As an effect,the modules are smaller,consume less power, and permit increased port density while being less expensive XFP.

Each SFP+ module houses an optical transmitter and receiver. One end of the module is an SerDes Framer Interface(SFI) serial interconnect,which handles differential signals as much as 10 Gbits/s. Another end is an optical connection that matches the 10GbE and 8GFC standards. The SFP+ active optical cable has electrical input and outputs by having an optical transmitter and receiver internal to the cable. Active cables with SFP+ terminations can also be copper-based with integrated pre-emphasis and equalization.

The image and Table below show the comparison between X2,XFP and SFP+. 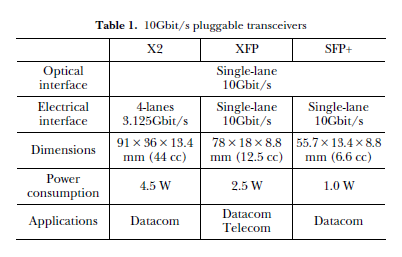