How 400G Has Transformed Data Centers

With the rapid technological adoption witnessed in various industries across the world, data centers are adapting on the fly to keep up with the rising client expectations. History is also pointing to a data center evolution characterized by an ever-increasing change in fiber density, bandwidth, and lane speeds.

Data centers are shifting from 100G to 400G technologies in a bid to create more powerful networks that offer enhanced experiences to clients. Some of the factors pushing for 400G deployments include recent advancements in disruptive technologies such as AI, 5G, and cloud computing.

Today, forward-looking data centers that want to maximize cost while ensuring high-end compatibility and convenience have made 400G Ethernet a priority. Below, we have discussed the evolution of data centers, the popular 400G form factors, and what to expect in the data center switching market as technology continues to improve.

The concept of data centers dates back to the 1940s, when the world’s first programmable computer, the Electronic Numerical Integrator and Computer, or ENIAC, was the apex of computational technology. The latter was primarily used by the US army to compute artillery fire during the Second World War. It was complex to maintain and operate and was only operated in a particular environment.

This saw the development of the first data centers centered on intelligence and secrecy. Ideally, a data center would have a single door and no windows. And besides the hundreds of feet of wiring and vacuum tubes, huge vents and fans were required for cooling. Refer to our data center evolution infographic to learn more about the rise of modern data centers and how technology has played a huge role in shaping the end-user experience. 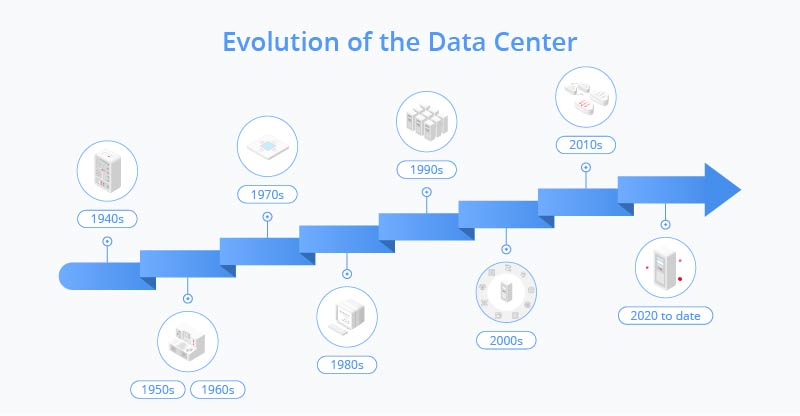 The Limits of Ordinary Data Centers

Some of the notable players driving the data center evolution are CPU design companies like Intel and AMD. The two have been advancing processor technologies, and both boost exceptional features that can support any workload.

And while most of these data center processors are reliable and optimized for several applications, they aren’t engineered for the specialized workloads that are coming up like big data analytics, machine learning, and artificial intelligence.

How 400G Has Transformed Data Centers

The move to 400 Gbps drastically transforms how data centers and data center interconnect (DCI) networks are engineered and built. This shift to 400G connections is more of a speculative and highly-dynamic game between the client and networking side.

Currently, two multisource agreements compete for the top spot as a form-factor of choice among consumers in the rapidly evolving 400G market. The two technologies are QSFP-DD and OSFP optical/pluggable transceivers.

QSFP-DD is the most preferred 400G optical form factor on the client-side, thanks to the various reach options available. The emergence of the Optical Internetworking Forum’s 400ZR and the trend toward combining switching and transmission in one box are the two factors driving the network side. Here, the choice of form factors narrows down to power and mechanics.

The OSFP being a bigger module, provides lots of useful space for DWDM components, plus it features heat dissipation capabilities up to 15W of power. When putting coherent capabilities into a small form factor, power is critical. This gives OSFP a competitive advantage on the network side.

And despite the OSFP’s power, space, and enhanced signal integrity performance, it’s not compatible with QSFP28 plugs. Additionally, its technology doesn’t have the 100Gbps version, so it cannot provide an efficient transition from legacy modules. This is another reason it has not been widely adopted on the client side.

However, the QSFP-DD is compatible with QSFP28 and QSFP plugs and has seen a lot of support in the market. The only challenge is its low power dissipation, often capped at 12 W. This makes it challenging to efficiently handle a coherent ASIC (application-specific integrated circuit) and keep it cool for an extended period.

The switch to 400GE data centers is also fueled by the server’s adoption of 25GE/50GE interfaces to meet the ever-growing demand for high-speed storage access and a vast amount of data processing. 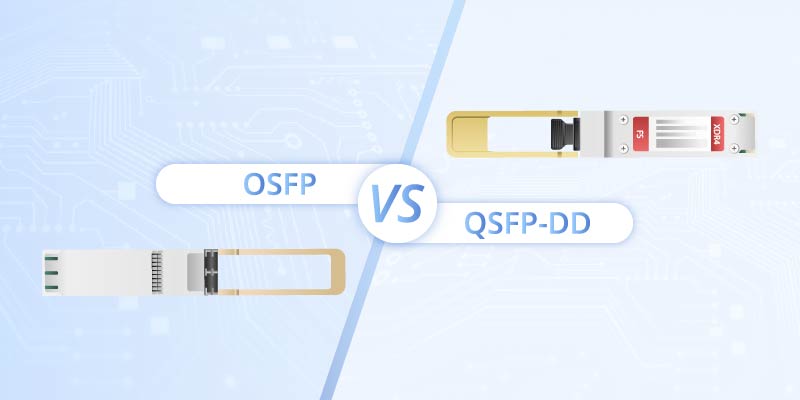 Cloud service provider companies such as Amazon, Facebook, and Microsoft are still deploying 100G to reduce costs. According to a report by Dell’Oro Group, 100G is expected to peak in the next two years. But despite 100G dominating the market now, 400G shipments are expected to surpass 15M million switch ports by 2023.

Data center switches are available in a range of form factors, designs, and switching capabilities. Depending on your unique use cases, you want to choose a reliable data center switch that provides high-end flexibility and is built for the environment in which they are deployed. Some of the critical factors to consider during the selection process are infrastructure scalability and ease of programmability. A good data center switch is power efficient with reliable cooling and should allow for easy customization and integration with automated tools and systems. Here is an article about Data Center Switch Wiki, Usage and Buying Tips.

What’s the Current and Future Trend of 400G Ethernet?