Fiber optics is a technology that uses glass or plastic threads, namely fibers to transmit data. With its advantages over copper network, fiber optic lines have revolutionized long-distance phone calls, cable TV and the Internet. However, to many newbies of this industry or amateur of fiber optics, there are many terminologies that should be known before their learning journey. These terminologies are complicated and even dull which are hard to remember or understand. Don’t worry. Just reading this paper, you may find that it’s more easier to remember those complicated fiber optic terminologies than you think.

Optical Fiber: Thin strands of highly transparent glass or sometimes plastic that guide light.
Core: The center of the fiber where the light is transmitted.
Cladding: The outside optical layer of the fiber that traps the light in the core and guides it along – even through curves. This layer is never stripped off the fiber.
Buffer coating or primary coating: A hard plastic or acrylic coating on the outside of the fiber that protects the glass from moisture or physical damage.
Mode: A single electromagnetic field pattern (think of a ray of light) that travels in fiber.
Multimode fiber: has a bigger core (almost always 62.5 microns – a micron is one one-millionth of a meter – but sometimes 50 microns) and is used with LED sources at wavelengths of 850 and 1300 nm for short distance, lower speed networks like LANs (Local Area Networks).
Single-mode fiber: has a much smaller core, only about 9 microns, and is used for telephony and CATV (Cable TV) with laser sources at 1300 and 1550 nm. It can go very long distances at very high speeds but with higher cost.
Note: Both multimode and singlemode fiber have an outside diameter of 125 microns – about 5 thousandths of an inch – just slightly larger than a human hair.

Plastic optical fiber (POF): POF is a large core (about 1mm) multimode fiber that can be used for short, low speed networks.

When we talking about fiber optic cables structure, these terms you should know:

Cable: Cables have from one to hundreds of fibers inside. Because we rarely use the bare fibers in reality. Fibers needs protection to survive all the places it gets installed and it’s the cable that provides it.
Jacket: A protective outer covering of cable. Depending on the intended use for the cable and the operational environment, it may protect against moisture, abrasion, magnetic fields, radiation, and so on. Some cables have more than one jacket which is also called cable sheath. Jacket materials can be various, such as PVC, LSZH, plenum (OFNP) etc.
Strength Members: A strength member is an added component to a jacketed cable to help preserve the integrity and prevent separation in the mated ferrules. In most instances it is Kevlar Aramid Yarn, but can also be a flexible, but stiff fiberglass rod that runs the length of the cable.
Armor: A protective covering of cables that is used to discourage rodents from chewing through it.
LSZH: Low smoke zero halogen, is a material classification typically used for cable jacketing in the wire and cable industry.
OFNP Cables: OFNP stands for Optical Fiber Nonconductive Plenum. OFNP cables have fire-resistance and low smoke production characteristics. They can be installed in ducts, plenums and other spaces used for building airflow. This is the highest fire rating fiber cable and no other cable types can be used as substitutes.
OFNR Cables: OFNR stands for Optical Fiber Nonconductive Riser. OFNR cables are used in Riser areas which are building vertical shafts or runs from one floor to another floor. OFNR cables can not be installed in plenum areas since they do not have the required fire and smoking rating as Plenum rated cables. OFNP plenum cables can be used as substitutes for OFNR cables.

Fiber termination is an important part of fiber optic cabling. The following terms you should know in this part of work. 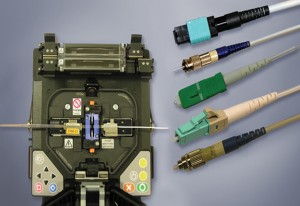 Connector: A non-permanent device for connecting two fibers or fibers to equipment where they are expected to be disconnected occasionally for testing or rerouting. It also provides protection to both fibers. (Parts for an ST connector are shown.)
Ferrule: A tube that holds a fiber for alignment, usually part of a connector.
Splice: a permanent joint between two fibers.
Mechanical Splice: A splice where the fibers are aligned and joined by a mechanical splice device.
Fusion Splice: A splice created by welding or fusing two fibers together.
Cable Management: Terminations and Splices require some hardware for protection and management: patch panels, splice closures, ODF (optical distribution frame), FTB (fiber termination box) etc.

Some specifications we should know in order to better understand the fiber performance, including:

Attenuation: The reduction in optical power as it passes along a fiber, usually expressed in decibels (dB).
Bandwidth: The range of signal frequencies or bit rate within which a fiber optic component, link or network will operate.
Decibels (dB): A unit of measurement of optical power, which indicates relative power. A -10 dB means a reduction in power by 10 times, -20 dB means another 10 times or 10 times overall, -30 means another 10 times or 1000 times overall and so on.

Micron (um): A unit of measure used to measure wavelength of light.
Nanometer (nm): A unit of measure used to measure the wavelength of light (meaning one one-billionth of a meter).
Optical Loss: The amount of optical power lost as light is transmitted through fiber, splices, couplers, etc, expressed in dB.
Optical Power: is measured in “dBm”, or decibels referenced to one milliwatt of power. while loss is a relative reading, optical power is an absolute measurement, referenced to standards. You measure absolute power to test transmitters or receivers and relative power to test loss.
Absorption: Absorption occurs in several specific wavelengths called water bands due to the absorption by minute amounts of water vapor in the glass.
Scattering: The change of direction of light after striking small particles that causes loss in optical fibers and is used to make measurements by an OTDR
Wavelength: A term for the color of light, usually expressed in nanometers (nm) or microns (m). Fiber is mostly used in the infrared region where the light is invisible to the human eye.

We will need some tools for installation and termination. Generally, they are:

Jacket Slitter or Stripper: A stripper for removing the heavy outside jacket of cables.
Fiber Stripper: A precise stripper used to remove the buffer coating from the fiber for termination, connectorization or splicing.
Cleaver: A tool that precisely “breaks” the fiber to produce a flat end for connectorization or splicing when polishing is NOT required.
Scribe: A hard, sharp tool that scratches and cleaves the fiber as it exits the tip of the connector user to sever or break the fiber prior to polishing.
Polishing Puck: for connectors that require polishing, the puck holds the connector in proper alignment to the polishing film.
Polishing Film: Fine grit film used to polish the end of the connector ferrule and the fiber endface.
Crimper: A tool that crimps the connector to the aramid fibers in the cable to add mechanical strength.
Fusion Splicer: Also called fusion splicing machine, an instrument that splices fibers by fusing or welding them, typically by electrical arc.
Cleaner: A professional cleaning kit for optical fiber ends and connectors, which can do great help in reducing light signal return loss.
Microscope: used to inspect the end surface of a connector for flaws or dirt.

When we finished the installation, fiber testing is an very necessary part. Commonly used fiber testers include: 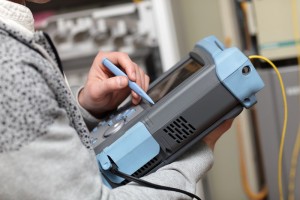 Optical Power Meter: An instrument that measures optical power from the end of a fiber.
Optical Light Source: An instrument that uses a laser or LED to send an optical signal into fiber for testing loss of the fiber.
Optical Loss Test Set (OLTS): A measurement instrument for optical loss that includes both a meter and source.
Loopback: short, single fiber cables with connectors on both ends, used to test unknown cables.
Mating Adapter: also called splice bushing or couplers, allow two cables with connectors to mate.
Visual Fault Locator: A device that allows visual tracing and testing of continuity.
Fiber Identifiers & Talk Set: It is essential installation and maintenance instrument in data networks, CATV and telecommunication networks. Fiber identifier can identify the optical fiber by detecting the optical signals transmitted through the cables. Talk Set combines in one set the functions of both a digital optical phone and a stabilized light source. It is usually used in pairs, and can work over 80km.
OTDR: An instrument that uses backscattered light to find faults in optical fiber and infer loss from only one end of the cable.

It may not include entire terms, welcome friends to add more about this.

7 Responses to Complicated Fiber Optic Terminologies Are No Longer Complicated