400G Ethernet technology is demonstrated at the Optical Networking and Communication Conference & Exhibition (OFC) 2017, and new transceiver module types like 400G FR8 and LR8 (also known as 400G PAM4 transceivers) are announced. Why 400G now? While we’re still considering adopting 100G in our business, some hyperscale data centers are in urgent demand of improvements in speed and density. So component makers worked out the 400G Ethernet solutions for this group, of which CFP8 FR8 and LR8 are two 400G  transceivers using 50G PAM4 technology.

Before going to details about the 400G FR8 and LR8, let’s first have a look at CFP8 form factor. CFP8 is the 400G form factor type specified by the CFP multi-source agreements (MSA). It has the same size as CFP2 module but supports 4x100G and 400G through the use of 16x25G electrical I/O connector, which is 4 times the CFP2’s 1x100G. Optical specifications of CFP8 are following other standards organizations like IEEE and ITU-T. 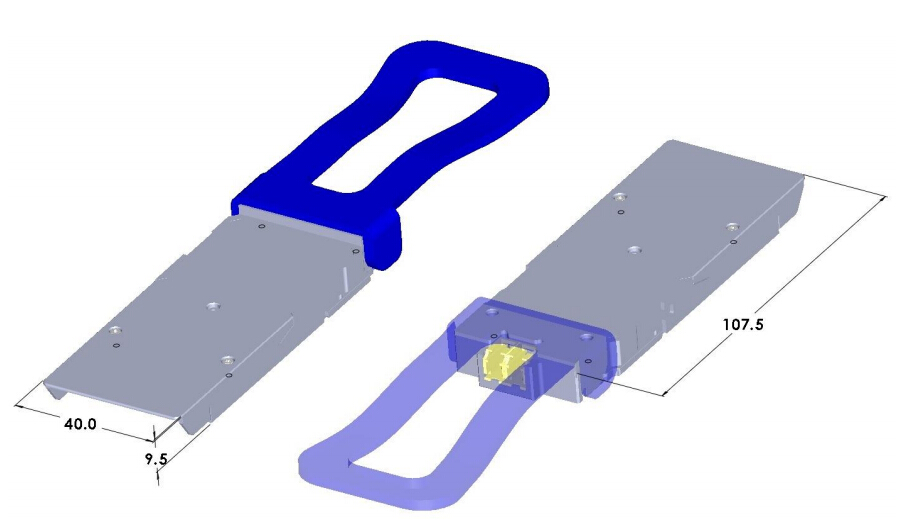 CFP8 FR8/LR8 operates over single-mode fiber and has LC duplex connector. FR8 supports 2km reaches and LR8 supports 10km reaches. As the following diagram shows, FR8/LR8 uses 8x50G PAM4 WDM technology. The output signal is multiplexed into a single fiber, allowing it to transmit at 400Gb/s, and the receiver de-multiplexes the input signal to 8 optical channels of 50Gb/s. The 400G FR8/LR8 consumes less than half the power per Gigabit compared to a 100G CFP4 MSA. 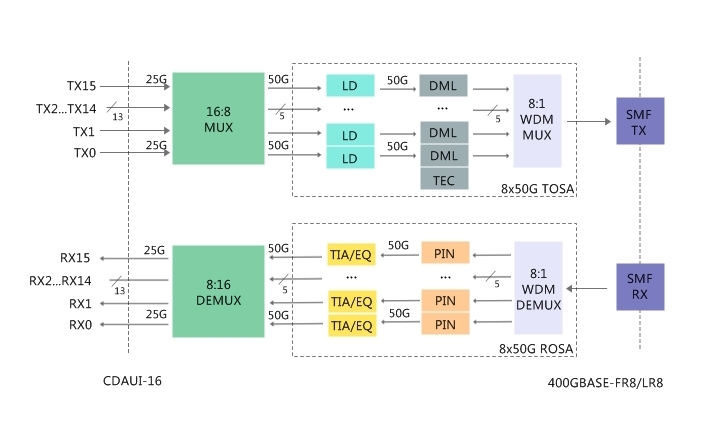 The MSA-compliant 400G CFP8 FR8/LR8 is enabled by 50G PAM4 technology (PAM4 is a modulation format that has been adopted by IEEE for 50Gb/s per lane Ethernet signaling.). So They are also known as 400G PAM4 transceivers. The PAM4 technology used for CFP8 is very different from the binay non-return to zero (NRZ) which is the usually used mechanism in serial communications. By driving the laser to generate one of the two output amplitudes, NRZ has two signaling levels. PAM4 has four distinct levels to encode two bits of data, essentially doubling the bandwidth of a connection, i.e., when used for same bandwidth optical devices, PAM4 doubles the transmission capacity.

In addition to 400GE, PAM4 is also expected to become a good fit for other high-speed serial interfaces like 50GE, 100GE, 200GE and Fibre Channel. Also a more optimized technology 100G PAM4 is in development, which will also be used for 400G Ethernet with higher performance.

For 400G Ethernet, PAM4 is the most feasible solution considering the its simplicity and lower power consumption, and it is currently the most accessible approach compared with other technologies. The CFP8 FR8/LR8 has been demonstrated at the OFC 2017, and the leading companies are working on bringing it to market while keeping the cost acceptable. It is worth to believe that with their efforts the price of 100G devices will drop greatly and 400G will be deployed not only in hyperscale data centers but also in other enterprise data centers.