As we talk too much about the advantages of fiber optic cabling over copper cabling, and too many knowledge about fiber optic transceiver, today, I would like to talk something about the copper-based Ethernet. As we know, copper-based Ethernet connections are limited to a data transmission distance of only 100 meters when using unshielded twisted pair ( UTP ) cable. But this is not the main topic of today’s discussion. Today’s main topic will be: what is  1000BASE-T, what is 1000BASE-TX, and 1000BASE-T vs 1000BASE-TX differences.

In the past, Ethernet cable had a reputation for being slower than fiber optic cable, but that has started to change. The speed of copper-based Ethernet was once limited to 10 Mbps. However, “Fast Ethernet” offers speeds of up to 100Mbps, and “Gigabit Ethernet” can provide speeds of up to 1000Mbps over twisted pair. Thus, IEEE 802.3ab, which defines the widely used 1000BASE-T interface type, uses a different encoding scheme in order to keep the symbol rate as low as possible, allowing transmission over twisted pair. 1000BASE refers to a Gigabit Ethernet connection that uses the unfiltered cable for transmission. “T” means twisted-pair cable (e.g. the common Cat5 in use today).

1000BASE-T (also known as IEEE 802.3ab) is a standard for Gigabit Ethernet over copper wiring. Each 1000BASE-T network segment can be a maximum length of 100 meters (330 feet), and must use Category 5 cable or better (including Cat 5e and Cat 6). 1000BASE-T can be used in data centers for server switching, for uplinks from desktop computer switches, or directly to the desktop for broadband applications. 1000BASE-T allows autonegotiation between 100Mbps and 1000Mbps. A big advantage of 1000BASE-T is that existing copper cabling can be used instead of having to rewire with optical fiber. 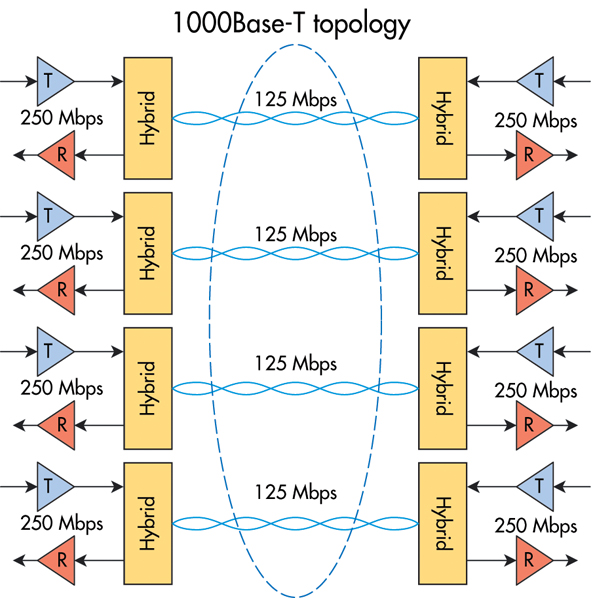 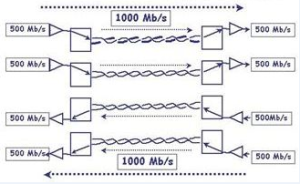 1000BASE-TX is a physical layer standard similar to 1000BASE-T created and managed by Telecommunications Industry Association (TIA) (1000BASE-TX is also referred to as TIA/EIA 854). 1000BASE-TX uses two pairs of wires, instead of four, for data transmission which enables transmitting data at speeds of gigabits per second on category 6 and 7 cables. It is also maintained under the IEEE 802.3ab standard. Though 1000BASE-TX enables the building of devices with less circuitry to support, it has not been as commonly used as 1000BASE-T, due to the high cost of Category 6 and 7 cable requirements and the falling cost of 1000BASE-T products.

1000BASE-T is designed to operate over 4-pair UTP cable and supports full-duplex data transfer at 1000Mbps. But 1000BASE-TX operated over only two of the four pairs in the cable. 1000Base-TX transmits data at 500 Mbps on two pairs and receives data on the remaining two pairs at the same data rate. In addition, delay skew, which is the difference between the slowest and fastest pairs within a cable, becomes increasingly important as data rates increase. This depends that Cat 5 cabling can be used with the 1000BASE-T standard. But 1000BASE-TX requires Cat 6 cabling. Furthermore, 1000BASE-TX standard can also be implemented with simpler electronics.