How to Use A 32 Port Switch for Modern 40G Data Center?

Old network infrastructure of data centers is not capable enough for data centers that should deal with a huge amount of traffic now. So more and more data centers are upgrading from 10G networking to 40G networking by using 40 Gigabit Ethernet switch, of which 32 port Gigabit switch is a specific choice. This post will discuss how to use 32 port switch for modern 40G data center spine-leaf topology.

What are the limits of old data center network infrastructure? In the past, the major traffic in data centers is in the north-south direction. As for data center switches, it is enough to use 10G uplink ports between the Top of Rack (ToR) switches and the aggregation switches. But as new applications and services rapidly emerge, the traffic between the end user and the data center is increasing, and the traffic in the east-west direction within the data center is increasing as well. Issues of congestion, poor scalability and latency occur when data centers keep using traditional network infrastructure.

In order to meet the requirements of the ever increasing network applications and services, data centers are constantly seeking better solutions. The primary problems are about bandwidth and latency. So one important thing is to upgrade from 10G networking to 40G networking. Since the 40G switch price and the 40G accessory price have dropped a lot, it is feasible to deploy 40G 32 port switches in the aggregation layer. In order to reduce the latency, it is wise to adopt the new spine-leaf topology compared with the old topology.

This new data center fabric by using 32 port switch is an improvement in bandwidth and latency, but it is not perfect either. For every network switch, it has limits on its memory, including the memory of MAC addresses, ARP entries, routing information, etc. Particularly for the core switch, the number of ARPs it can store is still limited compared with the large number it has to deal with.

Therefore, there’s need to split the network into zones. Each zone has its own core switches, and each pod has its own spine switches. Different zones are connected by edge routers. By adopting this design, we are able to expand our network horizontally as long as there are available ports on the edge routers. 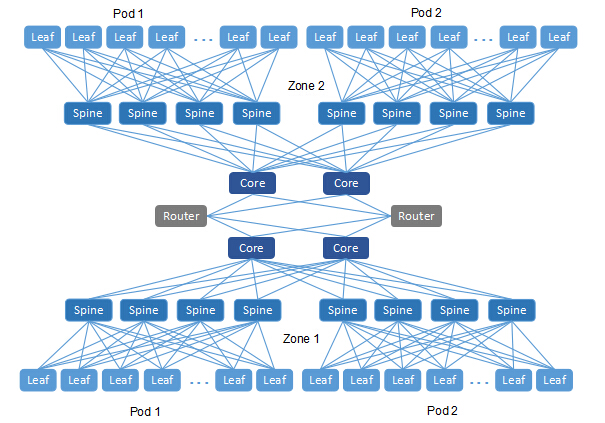 The transformation of data centers is mainly due to the demand of the users. The increasing amount of networking applications and traffic pushes data centers to evolve from old fabric to new fabric. So some data centers have changed from 10G networking to 40G networking by using 40 Gigabit Ethernet switch as spine switch such as a 32 port switch. Now 32 port switch price varies a lot in the market. FS.COM is one of suppliers that provide the most cost-effective switches.