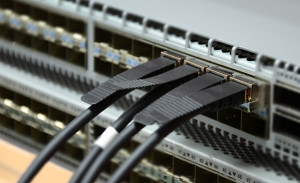 10GBASE-T, or IEEE 802.3an-2006, is a standard released in 2006 to provide 10 Gbps connections over unshielded or shielded twisted pair cables, over distances up to 100m. Category 6a is required to reach the full distance of 100m and category 6 may reach a distance of 55m depending on the quality of installation, determined only after re-testing to 500 MHz. The new 10GBASE-T SFP+ transceiver delivers the flexibility and port density well known to the SFP+ form-factor, utilizing Cat 6a UTP structured cabling for network connectivity. It is a power optimized solution for lengths up to 30m, engineered to deliver a minimum power saving of at least 0.5W per port compared to an equivalent embedded 10GBASE-T RJ45 for the same length (Cat6a cable, up to 30m). These power savings can add-up in ToR, mid-row and end-of-row switch connectivity. Implemented as an SFP+ form factor, the new 10GBASE-T transceiver module also delivers a pay-as-you-grow option.

The concept of standard, structured cabling provides a long-term underlying foundation of transmission infrastructure that follows a base set of engineering rules. 10GBase-T retains and abides by this by operating over the installed base of twisted-pair copper cable already in place for lower-speed applications. 10GBase-T uses the same cabling-link-negotiating concepts as do 1GBase-T, 100Base-T and 10Base-T, providing a clear path of bandwidth upgradeability as needed, by leveraging the existing pair infrastructure. Within a rack, following link segment specifications, the same 10GBase-T copper twisted-pair cabling will enable use with earlier Ethernet generations – 10MB, 100MB and 1GB operation. To extend this further, this same copper twisted-pair cabling is utilized outside the equipment distribution area (EDA) zone, connecting with horizontal distribution area in the data center.

As a technology, 10GBase-T enables network managers to preserve their knowledge base of Ethernet transport while seamlessly upgrading bandwidth capacity from 1G to 10G rates. Additionally, network managers preserve their underlying investment in the maintenance of standard, structured cabling systems. But SFP+ Direct Attach Cable is supported only on 10G ports. Do not insert a DAC cable into a 1G port.

SFP+ Direct Attach cables, in contrast, cannot be field-terminated. SFP+ uses a passive twin-ax cable assembly and connects directly into a SFP+ housing; they are specially terminated at the vendor site and must be purchased at pre-determined lengths. This adds overhead to cable management inventory, while preventing a clean, efficient cable infrastructure design.

At a physical layer (PHY) device level, 10GBase-T power consumption, whether at full 100-meter reach or 30-meter short reach mode, will be higher than SFP+ Direct Attach, including the electronic-dispersion-compensation chip. A 10GBase-T PHY, at the device level, can consume anything from two to four Watts per port compared to two Watts per port for SFP+ Direct Attach.

SFP+ direct attach cables are widely used in varies condition for short distance 10G transmission, and 10GBASE-T works with Cat 6 and Cat7 cable that are commonly used for 1Gb network connections, which all have their own special applications.