RJ45 vs SFP Port: Which Should I Use to Connect Two Switches?

When switches have both SFP port and RJ45 Ethernet port for 1000Mbps connections, it is always the case for us to decide whether to use SFP fiber optic module or RJ45 Ethernet cable solution. So RJ45 vs SFP, which shall we use for connection two switches? It really depends on many factors, but there are some principles that we could follow in our situation so as to meet our requirements.

The first principle is appropriate for any cases of 1000Mbps deployment. That is when the distance of the run is over 328 ft/100 m, fiber SFP module must be considered instead of copper RJ45 port or copper SFP RJ45 module. Since 1000Mbps could only go as far as 100 m over copper cabling.

When the link distance is under 100 m, there are some other principles that we should follow when we decided to use RJ45 or SFP.

1. Considering security issue, using fiber SFP module is better than Cat5e/6 RJ45 Ethernet cable or SFP RJ45 module in some of the worst circumstances. RJ45 is using electric current so it is easier to catch on a fire/lightning while fiber SFP module has no such problem. Also using fiber optic module is safer in terms of Internet security, because intercepting data transmissions by tapping copper cable is less complicated than tapping on fiber optic cable. So when security could be a problem in the connection, using fiber SFP is better than RJ45 port.

2. Reliability is also a key factor in transmission. Fiber is often considered more reliable due to its properties. Copper RJ45 Ethernet cable has the risk of interference since it uses electric signal. The issue is usually called EMI (Electromagnetic Interference) when the electric signal is affected by some external elements, such as something with high voltage. So when the cable run is going through some places that the electric signal can be interfered, choose fiber rather than copper RJ45 cabling.

4. Cost is also important in deployment. When the three issues above do not matter in our situation, cost is what we care. Since Rj45 Ethernet port and the SFP port actually run at the same speed, choosing the RJ45 ports to connect the switches might be more economical since Cat5e/6 cable is lower-priced than the SFP transceiver module.

RJ45 vs SFP Port: Go to the Real Cases for 1000Mbps Switch Connections

These rules are found on the basis of some typical cases. If it is right the situation we’re in, we might feel lucky to get the direct answer. But most of the time even if we have known the principles for 1000Mbps deployment, it will still be confusing in real cases. Let’s see some cases of our fellows.

Case description: Right now my Ethernet switches are connected on Gigabit Ethernet ports over about 300 ft or so. Would it be better to replace that line with a fiber line even though my port is only SFP and not SFP+ and locked at 1Gb? One switch houses 24 heavy active users and the other houses about 80 active devices and is my core switch. My goal is to clear any/all latency that I can between the two buildings. 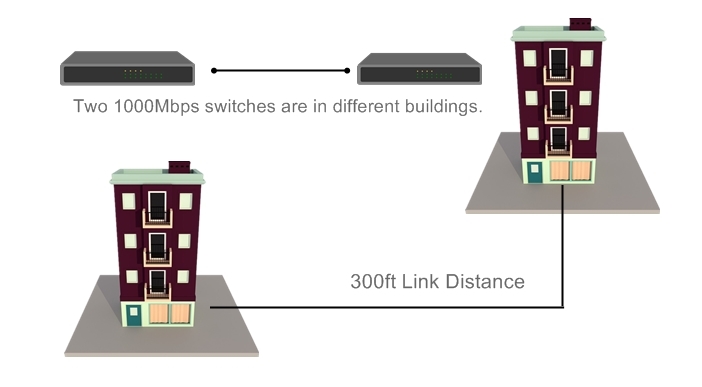 Case analysis: The two switches, in this case, are in two different buildings. The link distance is around the maximum transmission distance (100 m) for Cat5e/Cat6 Ethernet cable but does not exceed it, so that’s why the transmission was going well with the Rj45 Ethernet ports. The key purpose is about minimizing the latency. But in fact, the latency difference for using fiber will not be significant. Other factors are what should be considered since the switches are in two different buildings. Firstly, if the two buildings have separate electrical power inputs, then running copper between them could cause ground loop issues, so go fiber. Secondly, lightning strike might matter when using copper cable across the buildings, so go fiber. If neither of fiber or copper run is feasible, go wireless.

RJ45 vs SFP: Power Consumption Is a Challenge

Case description: I’m very confused. When connecting switches in the same rack it seems SFP is always used instead of a normal RJ45 Ethernet cable, even if the SFP port is only GB like the other ports on the gigabit switch. Why use SFP in that situation? SFP transceiver costs a lot.

Case analysis: This is about connecting 1000Mbps switches on the same rack. Fiber SFP port is used instead of RJ45 port maybe because there is electrical interference. Another reason could be the large amount of links. When there are more than 100 links, choosing SFP is more power saving than Ethernet ports. Also if there is a need to save the Ethernet ports for end-point connections, choose fiber for the switch connection. Keep in mind that we can use one type or the other but not both at the same time in a switch trunking.