100G QSFP28 is considered as the main form factor for 100G Ethernet in data center. And in order to satisfy different applications, various of 100G interfaces are developed. 100G PSM4 and 100 CWDM4 are two non-IEEE defined interfaces among them which are expected to be an alternative for data center 100G Ethernet. Here we introduce why should we use 100G PSM4 and CWDM4 QSFP28 transceivers, and discuss 100G PSM4 vs CWDM4 QSFP28 differences.

As we know, the most basic 100G interfaces used today are 100G SR4 and 100G LR4 which are defined by IEEE. However, their reaches are either too short or too long for practical applications in data center. Further more, the 100GBASE-LR4 is often costly. In fact, for data center operators, a 100G QSFP28 transceiver that is with 2km or 500m max reach is better. Thus, MSA (Multi-Source Agreement) strategy to bring a mid-reach solutions to the market. And 100G QSFP28 modules with PSM4 and CWDM4 interface are the products in this revolution. They are much less expensive than the 10km, 100GBASE-LR4 module, and support longer distance than 100GBASE-SR4 QSFP28.

Defined by the 100G PSM4 MSA, 100GBASE-PSM4 QSFP28 transceiver is a transceiver with parallel technology. It uses four lanes of parallel ribbon fiber delivering serialized data at a rate of 25 Gbps per lane (See the picture below). The light source of PSM4 optic module is a single uncooled distributed feedback (DFB) laser operating at 1310nm. 100g PSM4 QSFP28 transceiver doesn’t need a MUX/DEMUX for each laser but it does need either a directly modulated DFB laser (DML) or an external modulator for each fiber. A PSM4 QSFP28 module supports link lengths of up to 500 meters over single-mode fiber with 12 fiber MTP/MPO connectors. 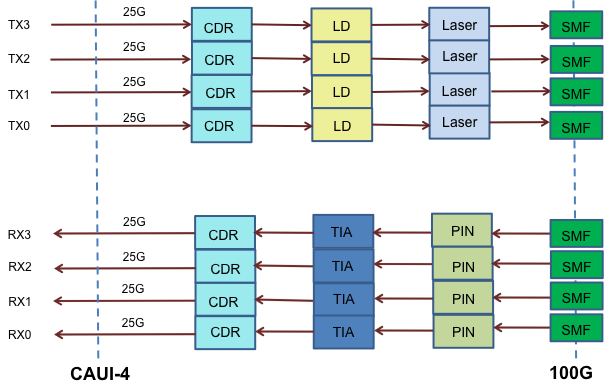 CWDM4 as opposed to PSM4 optics, uses only one optical fiber compared to four fibers for PSM4. Thus, the CWDM network is more cost-effective than a PSM4 network as a result of cable costs alone. CWDM4 module uses an optical multiplexer and de-multiplexer, operating around 1310nm with CWDM technology, as shown in the following picture. However, the high component count drives the cost of CWDM4 modules. Thus, on transceiver cost alone, CWDM4 is more expensive than PSM4. 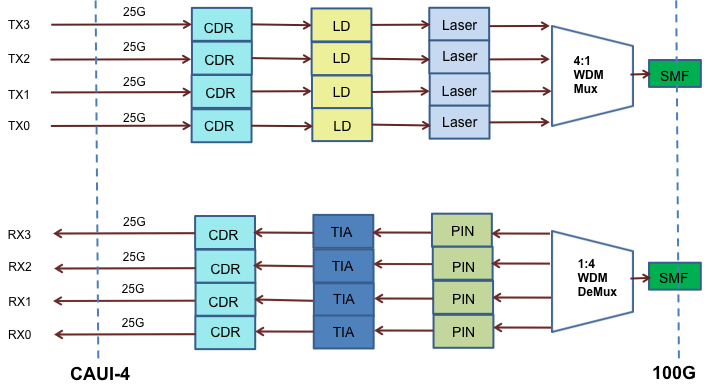 The following table shows a summary of comparison between 100G PSM4 and CWDM4 QSFP28 transceivers:

As early as two years ago, LightCounting had expected the 100G PSM4 and a merged CWDM4 offering to find strong market traction. Though in 2016, QSFP28 SR4 has still accounted for a large proportion of the market share (about 80%), the prospect of 100G PSM4 and CWDM4 is expected to stay robust. Many transceiver vendors have introduced the PSM4 and CWDM4 QSFP28 modules to their 100G product list. In addition, according to the fibeReality (consulting and market research firm specializing in the telecommunications and data communications optical industry), the price of 100G QSFP28 PSM4 and CWDM4 transceiver will drop to a historic low. Now we have to see how PSM4 and CWDM4 play in 2017. Talking about your opinion in the comments section.