OVS vs Linux Bridge: What Are They?

Open vSwitch (OVS) is an open source multilayer virtual switch. It usually operates as a software-based network switch or as the control stack for dedicated switching hardware. Designed to enable effective network automation via programmatic extensions, OVS also supports standard management interfaces and protocols, including NetFlow, sFlow, CLI, IPFIX, RSPAN, LACP, 802.1ag. In addition, Open vSwitch can support transparent distribution across multiple physical servers. This function is similar to the proprietary virtual switch solutions such as the VMware vSphere Distributed Switch (vDS). In short, OVS is used with hypervisors to interconnect virtual machines within a host and virtual machines between different hosts across networks. 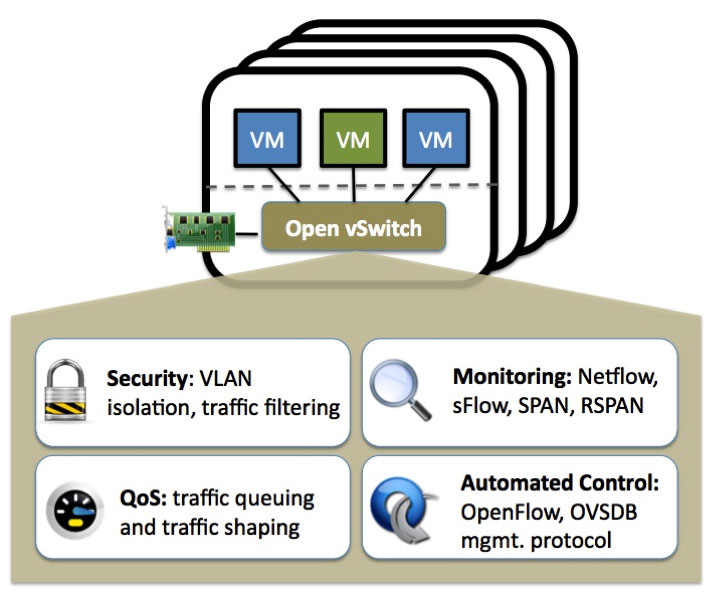 As mentioned above, the Open vSwitch is a multilayer virtual switch, which can work as a Layer 2 or Layer 3 switch. While the Linux bridge only behaves like a Layer 2 switch. Usually, Linux bridge is placed between two separate groups of computers that communicate with each other, but it communicates much more with one of the computer groups. It consists of four major components, including a set of network ports, a control plane, a forwarding plane, and MAS learning database. With these components, Linux bridge can be used for forwarding packets on routers, on gateways, or between VMs and network namespaces on a host. What’s more, it also supports STP, VLAN filter, and multicast snooping.

OVS vs Linux Bridge: Advantages And Disadvantages of OVS

Compared to Linux Bridge, there are several advantages of Open vSwitch:

Despite these advantages, Open vSwitch have some challenges:

Linux Bridge is still popular mainly for the following reasons:

However, there are some limitations:

OVS vs Linux Bridge: who’s the winner? Actually, both of them are good network solutions and each has its appropriate usage scenarios. OVS has more functions in centralized management and control. Linux Bridge has good stability that is suitable for Large-scale network deployments. All in all, The winner is the right one that meets your demands.

Related Article: OpenStack vs OpenDaylight vs OpenFlow vs OpenvSwitch: What’re Their Relations?