Open Switch vs Openvswitch: What Are They?

The open switch is the network switch that runs an open network operating system (NOS). Its hardware and software are separate entities and can be changed independently of each other. Therefore, the same hardware can support different operating systems or the same operating system can work on multiple hardware configurations. This means vendors can customize or rebrand the open switches by adding their own software. And there are multiple open source software such as Cumulus Linux and Pica8 Pic, which can be chosen by vendors. FS has teamed up with cumulus networks and introduced several Layer 2 switches and Layer 3 switches powered by Cumulus Linux OS, for instance, N5850-48S6Q 10GbE switch, N8000-32Q 40GbE switch, and N8500-32C 100GbE switch.

Openvswitch or open vSwitch (OVS) is an open source multilayer virtual switch issued under the Apache 2.0 license. It usually operates as a software-based network switch or as the control stack for dedicated switching hardware. Designed to enable effective network automation via programmatic extensions, OVS also supports standard management interfaces and protocols, including NetFlow, sFlow, CLI, IPFIX, RSPAN, LACP, 802.1ag. In addition, OVS can support transparent distribution across multiple physical servers. This function is similar to the proprietary virtual switch solutions such as the Cisco Nexus 1000V and the VMware vSphere Distributed Switch (vDS). In short, OVS is used with hypervisors to interconnect virtual machines within a host and virtual machines between different hosts across networks. 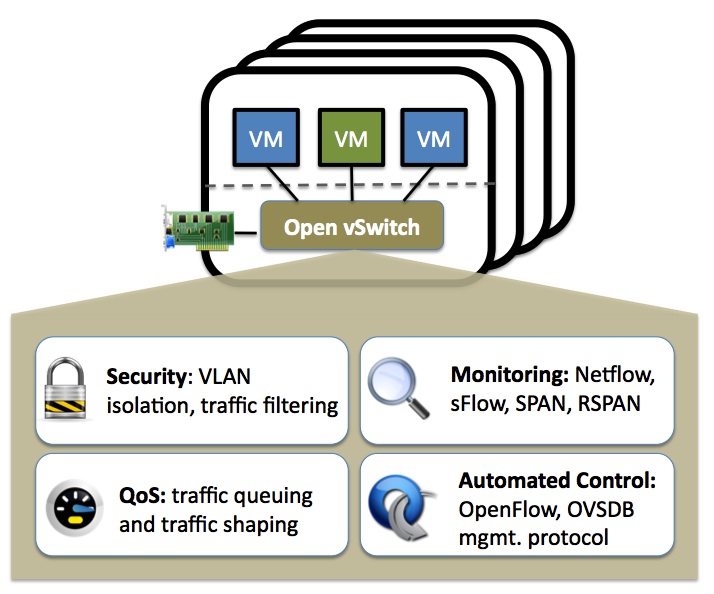 As mentioned above, open switch and openvswitch both are open source switch. However, they still differ mainly in two aspects.

For open switch, it is a physical switch that you can use wires to connect it with other network devices. What’s more, it has hardware and software. Its open hardware comes with a boot loader called the Open Network Install Environment (ONIE). Based on ONIE, consumers can load operating system software onto the switch.

For openvswitch, it behaves like a physical switch but virtualized. It has no hardware and represents as an entirely software. There is a software stack running on a server of openvswitch. This software stack could provide connections to virtual or logical Ethernet ports. Thus, there is any port on openvswitch and you don’t need to use wires to connect it with other network devices. Well, OVS can also be integrated with hardware and serve as the control plane for switching silicon.

After reading this post, you may know the difference between open switch vs openvswitch. Though they both are good solutions to meet the demand for network agility and scalability, the open switch may be more commonly used in the market now. FS provides N-series open network switch with good quality and nice price. If you have any needs, welcome to visit FS.COM.

Related Article: Open Source Switch: How Much Do You Know?