In the previous post “What is the difference between single-mode 1550nm or 1310nm SFP and multimode SFP“, I have mentioned these two points:

Indeed, we always like to associate multimode fiber with 850nm and single-mode fiber with 1310nm and 1550nm and firmly believe this rule. However, the fiber operating wavelengths are more extensive than we thought. That means it may be possible to use 1550nm or 1310nm SFP over MMF or transmit 850nm SFP over SMF.

Almost everyone used multimode fiber operated at an optical wavelength of around 800 to 880nm and used single-mode fiber which was almost always operated at 1310nm over distances of up to 100km and at 1550nm for longer distances. But in reality, it is quite possible to use 1550nm or 1310nm SFP over MMF, and some of the transceivers can satisfy this application. Moreover, it is also possible to use 850nm SFP over SMF in theory. As shown in the sketch below, modern single-mode fiber has very low attenuation at 850nm. In general, a multimode fiber will have around 2.5dB/km and a single-mode fiber will have about 1.8dB/km when operating at 850nm wavelength. 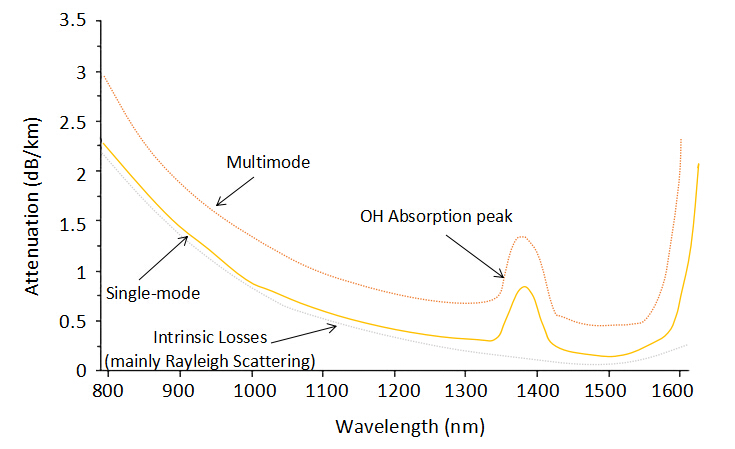 Why Don’t We Normally Do That?

Actually, multimode fiber operating at 1310nm is very commonly done in the practical application. The following table showed some types of optical transceivers that can transmit 1310nm over MMF.

Note: Every transceiver is individually tested on corresponding equipment such as Cisco, Arista, Juniper, Dell, Brocade and other brands, passed the monitoring of Fiberstore’s intelligent quality control system.

1. Typical light sources such as LEDs or VCSELs generally can’t couple a lot of power into the fiber so the use of 850nm would be restricted to quite low-speed links because such links generally employ sensitive optical receivers.

2. When operating much below 1250nm standard, single-mode fibers start operating like multimode fibers so there are several modes capable of propagating through the fiber. Since most single-mode fibers have a step index refractive index profile, it means that the bandwidth is very poor, typically 5-10MHz.km that is not much good for high-speed data.