How Does Fibre Channel Work?

In the past days, I have talked many about the Ethernet. Actually, there are many other networking protocols used in data transports. Fibre Channel (FC), my topic today, is one of them. Fibre Channel is a set of standard that define a high performance data transport connection technology. It is developed to satisfy the increasing demands for high-speed, high-volume data transfers in storage and network services. So, how does Fibre Channel work to achieve these applications?

Cable is one of the physical component of FC. It connect to ports on the devices to form a link. There are different types of FC ports. The following table summarizes sevent FC port types:

Three distinct topologies are defined for Fibre Channel to meet various of application and installation requirements. These topologies exhibit different performance characteristics, and are subject to different scalability limits.

Point-to-Point topology is the most basic and simple Fibre Channel topology. As its name suggests, two devices are directly connected by a Fibre Channel cable when using this topology. Addressing is simple and device availability is complete. However, it is not a common topology today. In general, it has been used to connect RAID (Redundant Array of Independent Disks) and other storage subsystems to servers in server-centric computing environments.

Arbitrated loop topology provides economical interconnection to applications. It is possible for individual transmission paths, or loops, to be time-shared by up to 126 devices. Each time a loop is available for use, the devices arbitrate to determine which device gets to send data or commands next. This topology is usually used to connect disk drives to RAID controllers or host bus adapters (HBA). 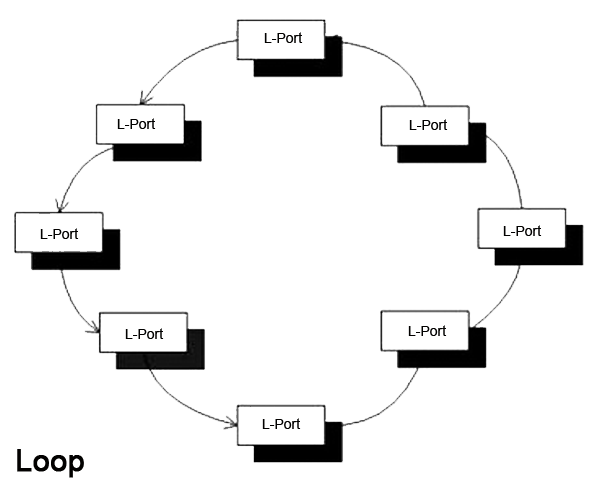 Switched fabric is a powerful FC topology used in modern Storage Area Network (SAN). It essentially consists of one or more switches, controlling a large amount of port-to-port transfers of data and commands (also know as frames) between nodes. Within a fabric, multiple interconnections happen concurrently—and all frames are routed to their proper destinations. System wide bandwidth can be as much as an order of magnitude greater than the speed of any single Fibre Channel link. With such high transfer rates, many users in a workflow can work with the same data at the same time, facilitating collaboration and increasing productivity. 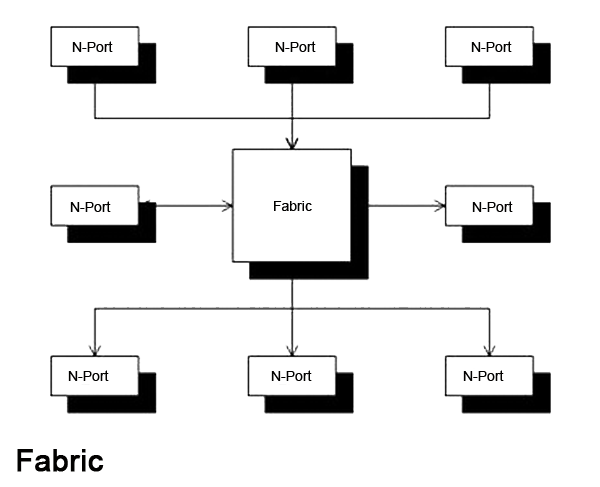 There are five protocol layers of Fibre Channel—FC-0, FC-1, FC-2, FC-3, and FC-4. An upper-level protocol mapping to FC-FS (Fibre Channel Framing and Signaling) constitutes an FC-4 that is the highest level in FC structure. To insure device interoperability, standards have been developed to map some of these higher-level protocols to a format that Fibre Channel can transmit. For example, one protocol defines how to translate SCSI (Small Computer System Interface) command descriptors, which would normally be sent in parallel, into serial Fibre Channel format, and back to parallel SCSI when they are received by the target device. The following network and channel protocol mappings have been specified or proposed:

This entry was posted in Fiber Optic Transceivers and tagged Fibre Channel. Bookmark the permalink.